Despite being told recently that Farnham's Music In The Meadow, summer gig series, on the bandstand at Gostrey Meadows was able to go ahead, after a further look at the government guidelines, it seems it will not now be possible and this gig is sadly cancelled after all!

Thinking was that families would be able to sit in their household groups and the band would need to have few enough members that they could also socially distance themselves from each other in the bandstand. The council  had proposed marking circles on the grass for household / bubble groups to sit in to maintain the required distancing and ensure numbers stayed in control.

The council say it seems dreadfully unfair that the event can’t go ahead when pubs are able to open inside and outside with no numbers restriction! They were ready to paint the circles onto the grass so there were designated ‘bubbles’ for each family but it appears gatherings of over 30 are not permitted as well as live music! Many musicians (including Elaine) have received no income from live music or financial help from the government since the lockdown began and there is the very real possibility that venues which used to support live music will cease to exist if the unfair hammering of live music continues much longer!

The Kindred Spirit Band line-up has adjusted since the lockdown. We welcome new bass player, Paul Critchfield, who has played with us once before and you may recognise him from Alan Clayson's band, "Clayson and the Argonauts". Our legendary drummer Les Binks will be our main drummer and talented Stevie Mitchell will be our main flute and sax player. Elaine Samuels and Martin Ash are the band members remaining unchanged.

We can't wait to be back playing live for you! Hopefully you'll see us at a live gig before the end of this year!

Our remaining 2020 gigs are still uncertain at the moment with the ongoing Covid 19 lockdown. Several gigs have already been postponed until 2021. Take a look on the gigs pages to see how things are shaping up!

The Kindred Spirit Band were invited to perform at Bob Prigmore's live, global, prog rock festival, presented by Beat Route Radio and with artistes from all over the world taking part! The festival will ran from 2pm - 10pm over Saturday 23rd and Sunday 24th May. It will be raised funds for the East Northants Community Services, who provide food banks and homeless shelters local to the radio station.

Given the inability of artistes to perform together during lockdown, Elaine represented the Kindred Spirit Band with a special 30min acoustic set. She will be performed live from her front room 'arena' (ha ha) at 15:20 on the Saturday!

Find out more about the Elemental album

Elaine and the Kindred Spirit Band, like the rest of the world's population, are self isolating!

Many of our gigs are cancelled or postoned. Check the gig lists for the latest information.

The Kindred Spirit Band have just been booked to play at the Cambridge Rock Festival, on the Sapphire Stage (Stage 2) on Sunday 21st June 2020, at 11am. This looks like being a great, four day festival. Come and join us! Find out the full line up and buy your tickets from:-
CambridgeRockFestival.co.uk

Elaine was approached in January 2020 to write an anthem type of song for the Extinction Rebellion group (XR).
She has now written the song and it can be viewed below.

Elaine has written many environmental themed songs, which can be found on all of the Kindred Spirit Band albums.

This premiere of the song was recorded at Elaine's January 19th 2020 open mic, with help from friends and musical colleagues, with no rehearsal, shortly after having written it! So it is a bit rough around the edges but Elaine wanted to get it 'out there' for environmental campaigners everywhere to use as soon as possible, as time is running out!

And here are the lyrics:-

Mid 8.1
If your house were collapsing in the middle of the night you would welcome a wake up call.
This planet is your home and it is being destroyed; So wake up before you lose it all...

Mid 8.2
The threat of extinction's real and with us now .We must act urgently, it's clear.
We need our world leaders to wake up and create green changes or we disappear...

The Kindred Spirit Band have just been booked for a MAJOR Music Festival, to perform in August! It is the fantastic "A New Day Festival", in Faversham, Kent.

We are a truly unique progfolkrock band! If you want to book us for an event go to our "Contact" page.

Our new brand new album "Elemental" is starting to get some great reviews:

"an ingenious and advanced folk-rock album...Written for a species that is about to be lost in the fires".
Neil Mach, Rawramp Magazine

"And as for the new album.... CRACKING. Not joking in saying deserves album of the year".
Chris Davenport, professional photographer

Alleya is a currently London-based musician working in a variety of creative and unique experiences. Her current work includes performance and composition with South-East London band Lucien Chase and solo bookings. She recently performed on The X Factor UK in an all female ensemble supporting singer Grace Davies. Alleya began learning violin at a young age, studying under Margaret Escobar and later with Emelinda Escobar. Her professional studies began at the University of Illinois Urbana-Champaign where she earned her Bachelor’s Degree in Violin Performance.

Elaine's new, "No Smoke Without Fire" song will be featuring on the band's forthcoming, new album and recording of the album at Skyline Studios continues from 18th May! Exciting! Click the link to hear the song as performed at the competition:-
https://www.youtube.com/watch?v=cnVbQ0vQwlQ&feature=youtu.be

Tour Kicks off in July

Last  year the Kindred Spirit Band recorded the first half of the new album including a very special population song.

The song hopes to explain why the growing global population is so damaging to our future and how the people of the world can act in a positive way, without the need to wait for government action (which looks like coming too late to prevent environmental disaster)!

Band Go Down A Storm at HRH Prog Fest 7 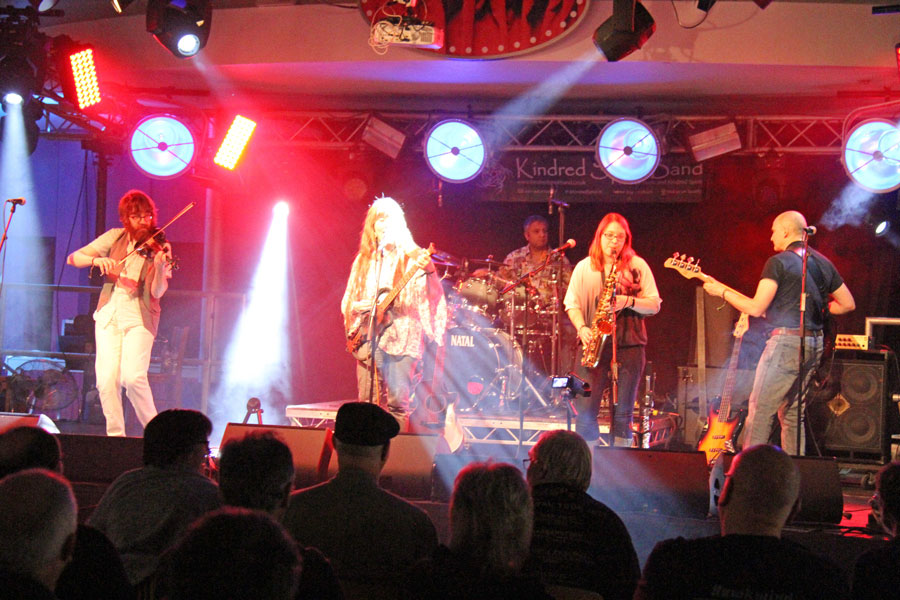 "Your set was a real highlight of the weekend. I’d never seen you guys live before.....
loved the set from start to finish, the camaraderie on stage between you guys was magnificent!!!"

Garry said this about his impression of the Kindred Spirit Band at HRH Prog Festival (click to hear this audio clip from his programme)
Audio Clip.

If you would like to see lots more photos and view a video with some antics from Martin Ash, take a look at the band Facebook Page

Here is the first page of our three page feature in Rock Society Magazine. If you want to read the whole article, you can obtain your copy here

The band have been back at Skyline Studios since February 2018 recording six new numbers (see details of the numbers below). Check out the recording process we went through here.

We now have six, new song tracks to release as singles via digital downloads or to add to a physical CD, if we decide there  are enough people wanting a physical CD to justify the cost of manufacturing one. We have created approx 1 minute clips of each one for you to have a listen to them, below!

Shall we make a new CD?

We are still deciding whether to make a physical CD album, to present our newly recorded songs or whether to just have digital downloads. You can influence this decision.

If you want a CD speak up and join our "New Album" list. If you join the list you will be the first people to get the physical album (if it comes out, for a Ł10 fee). You don't need to pay anything "up front" and you will get exclusive access to extra audio and video of the recording and creating process in a special, extra "New Album" newsletter, being dispatched monthly!

Whatever happens, we plan to record another 6 tracks (only 2 of which have yet to be written) and we hope to be ready to do this in the autumn, ready for a possible album launch in late January / early February.

Please note that some problems were experienced with joining this list, which have now been fixed!

Since the Kindred Spirit Band were going to be performing at it on March 23rd and quite a few people she spoke to seem unaware of it, Elaine has written an article about Twickenham's spectacular new arts centre, to help introduce it to everyone. She has written it like a tour around the centre with excellent photographs by RP Photography Solutions. Take a look below.

Following the passing of music legend, Ray Thomas, one of the original members of the Moody Blues, who the Kindred Spirit Band met at their concert with "Blue Onyx", in December 2010, at Leatherhead Theatre, Elaine has written the article below describing the musical legends who have been drawn to the Kindred Spirit Band since their formation after the dawn of the new millenium.Read the article

Elaine received an inspirational email from a new fan just before New Year's Eve, and felt compelled to write the article below , which she hopes will inspire everyone for 2018!